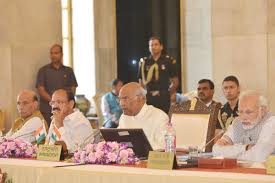 Addressing a conference of Governors at RashtrapatiBhawan here, P.M mentioned the target of ‘New India’ by 2022 and emphasised that this can be achieved only by making it a people’s movement, a PMO statement said.

P.M also said that the Governors can “motivate” banks to give loans under Mudra scheme to tribals, dalits and women, especially in the period between Constitution Day on November 26 and AmbedkarMahaparinirvanaDiwas on December 6.

He said Mahatma Gandhi, whose 150th birth anniversary will be celebrated in 2019, is a source of inspiration, “as we work towards an Open Defecation Free India.”

2.SC LAYS NORMS FOR ITSELF AND HCS TO DESIGNATE LAWYER AS SENIOR 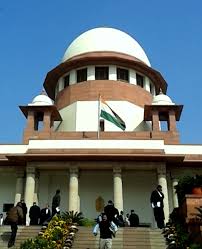 The Supreme Court on Thursday issued a slew of guidelines, including setting up of a permanent committee led by the Chief Justice of India, to accord senior designation to lawyers.

3. Representative of the bar

Present practice: So far, the judges of the Supreme Court and the high courts had sole discretion over whom to grant the senior gown. The reasons for conferring this honour have often remained opaque.

Who filed this case? The apex court had in March referred a PIL filed by senior lawyer Indira Jaising to a larger three-judge Bench.

The committee includes the chief ministers of all the states, representatives from across the political spectrum, Gandhians, thinkers, and eminent persons from all walks of life, the ministry said in a statement.

Objective: “The Committee will guide and approve policies, programmes, activities for the commemoration and will also supervise implementation of the decisions taken from time to time,” the statement said.

‘Ananta Volume 1 – Maestros of India,’ the official submission of The Art of Living Foundation has been accepted for the upcoming 60th Grammy Awards as a ‘World Music Album’ and one of the tracks, Guru Stotra, composed by Pt. VikkuVinayakram featuring 3 successive generations, SelvaganeshVinayakram and SwaminathanSelvaganesh and Siddhant Bhatia, has been accepted for “Arrangement – Instrumental and Vocals.”

The Supreme Court judgment, that came on October 11, criminalised sexual intercourse by a man with his minor wife. The apex court said that it can attract a jail term of 10 years under the India Penal Code or even a life term under the Protection of Children from Sexual Offences (POCSO) Act.

National Family Health Survey 2015-16 report: According to above survey, West Bengal has got the dubious distinction of having the maximum number of married girl children at 40%.The report said the lowest percentage of child marriages was recorded in Punjab and Kerala at 7.6 percent. According to the survey, the states with second and third highest percentage of brides under 18 years of age were Bihar and Jharkhand with 39 and 38 percent respectively.

1.UNITY DEAL BETWEEN HAMAS AND FATAH

Rival Palestinian factions Hamas and Fatah signed an agreement on Thursday on ending a decade-long split following talks mediated by Egypt in Cairo, with President Mahmud Abbas calling it a “final” accord.

Under the agreement, the West Bank-based Palestinian Authority is to resume full control of the Hamas-controlled Gaza Strip by December 1

2.US AND ISRAEL QUIT UNESCO

The U.S. on Thursday announced its withdrawal from the United Nations Educational, Scientific and Cultural Organization (UNESCO), accusing it of “continuing anti-Israel bias.”

UNESCO is the first UN agency to have admitted Palestine as a full member in 2011.

As required by law, the U.S. has stopped funding UNESCO since then.

Effective from: The U.S. withdrawal will take effect on December 31, 2018. Until then, it will remain a full member. Israel has also decided to pull out of UNESCO, Prime Minister Benjamin Netanyahu said.

As part of the agreement, Bharti Airtel will absorb Consumer Mobile Businesses (CMB) of TTSL and TTML across the country in 19 circles (17 under TTSL and two underTTML).

According to the data furnished by the Ministry of Statistics and Programme Implementation, September’s consumer price index (CPI) inflation remained static at 3.28 per cent as compared to August.

Finance Minister ArunJaitley has said the government, faced with the issue of non-performing assets, is working on a plan to rebuild the capacity of India’s banking sector so as to support growth.

Gross non-performing assets (NPA) of the public sector banks rose to Rs 6.41 lakh crore at the end of March 2017 as against Rs 5.02 lakh crore a year ago, according to Finance Ministry data.

4.INDUSTRIAL GROWTH RECORDED AS 4.3% IN AUGUST

Showing signs of revival, industrial production expanded at its fastest pace in nine months in August at 4.3 per cent.

Imp: Manufacturing has a higher weightage at 77.6% in Index of Industrial Production (IIP)

After years of disappointing growth, the global economy has begun to accelerate, World Bank President Jim Yong Kim said on Thursday, at the start of annual meetings of the International Monetary Fund and World Bank.

He cautioned that a rise in protectionism and policy uncertainty could derail this fragile recovery.

Challenges facing by the world: challenges the world faces today